One of Savory Spice co-founder Mike Johnston's early food memories is his Grandma Johnston's preserves and pickles. We asked him to tell us a little bit more about those early memories and art of pickling.

My grandparents on my dad’s side lived in Ina, a tiny farm town in southern Illinois. We’d go down every year and some of my fondest memories as a child were of those visits. Hostess snacks and colorful soda pops were plentiful. Maybe it was the heat of the summer or just the freedom of access (or excess!); I’m sure we had them at home too, but I strongly associate those treats with “Grandma’s house”.

Healthier foods I remember from summers at Grandma’s are canned, preserved, and pickled items. We didn’t have these at home—my mother had four young, pain-in-the-rear boys to chase around and no time for canning—so Grandma Johnston’s house was the first place I saw rows and rows of shiny jars filled with liquid, floating seeds, and various vegetables lining the pantry walls.

I didn’t know how she did it, or even if I would like them, but I sure liked looking at them.

Pickling at Grandma’s
I contacted my Aunt Bell, one of my dad’s older sisters, to see if she could fill me in on what she remembered about Grandma’s pickled items. Here’s what she had to say:

In the 1930s and 40s, at our house, canning was done outside on a big fire in a big washtub with a piece of wood in the bottom so the jars wouldn’t get too hot. Years later Mother got a pressure canner. Back then when she came home from working at the shoe factory she would can. Us kids would try and have everything ready for her; like having green beans picked, snubbed, and washed, or peas all picked and hulled.

Mother canned green beans, corn, peas, cabbage, beets, cucumbers, and tomatoes from the garden. She pickled the beets using mixed pickling spices. She made dill pickles, bread & butter pickles, and made sauerkraut from the cabbage.

Mother made some jelly, but not much as sugar was rationed at that time.

My First Spice Memories
I saw seeds floating in the pickled items my grandma made, so I guess that would qualify as my first spice memory.

My second spice memory is of the mysterious tied cloth ball and dry, faded green leaf that Grandpa Kolaras, my mom’s dad, would toss into a big pot of soup he would make for us a few times every year. Stifado (pronounced “stew-fa-dough” at our house), a Greek stew/soup, was a meal by itself and one that everyone in my family enjoyed, even my picky younger brother Rob. Of course, he’d eat around the whole boiler onions and devour the meat (beef or lamb were most common, but rabbit made it into the pot at least one time) and sop up the tasty broth with a big hunk of bread.

What made that broth so flavorful, aside from the homemade stock, were the spices in that mysterious cloth ball and the leaf. Those spices were pickling spices and the leaf was bay.

I never realized, until writing this article, that pickling spices were my first introduction to spices and so tightly tied to some really great food memories that I have. 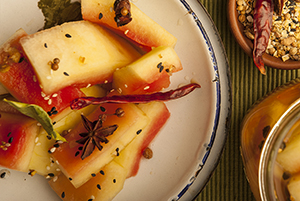 Those pickling spice memories were from the seventies and early eighties. Then there is a gap that easily covers the rest of eighties and all of the nineties when homemade pickled items weren’t a part of my vocabulary. I don’t know if pickling items ever went out of style or if I just lived in big cities where growing a garden was more of a challenge. Either way, pickling is thriving again and if you’re not doing it you are missing out!

Even if you don’t have the ability to grow a garden or time to preserve, you can make quick pickles from grocery store produce. One of my favorites is quick pickled watermelon rind. Pickling the rind is a great way to use the whole watermelon (you do need to remove the green skin on the rind as it isn’t very palatable). The rind absorbs flavors wonderfully, making it a great canvas for experimenting with different flavors.


What is Pickling Spice?
Pickling Spice, the spice mixture, belongs to the family of spice blends that is used to infuse flavors into heated liquids. Other Savory Spice blends in that family include: Brining Spice Ready Mix, Chai Spices, and mulling spices.

What makes Pickling Spice unique from other infusing blends is that while the others are almost always removed from the liquid after they’ve done their infusing job, Pickling Spice can be left in or removed depending on the application.

Grandma Johnston would leave the spice in the pickled items for a decorative effect more then anything else, because once the liquid is cooled the spices are no longer infusing additional flavor. It’s rather easy to remove a pickle from a jar without having to worry about biting down onto a hard spice like an allspice berry.

Grandpa Kolaras needed to remove the Pickling Spice from his Stifado because he knew that whole spices floating around in a hot soup wouldn’t be palatable; which is also the reason for the mysterious tied cloth ball, so he could easily remove the spices before serving.

Pickling spices are traditionally made up of whole or cracked spices, many of which are seeds. Fresh herbs are sometimes added to the items being pickled but traditionally weren’t a part of the spice blend. However, in my opinion, pickling spices can also include herbs. In fact, our Pickling Spice blend includes cracked bay leaves. If this blend had been around for Grandpa Kolaras, he could have used it and had one less ingredient to worry about!

"I never realized, until writing this article, that pickling spices were my first introduction to spices and so tightly tied to some really great food memories that I have."
- Mike Johnston

Homemade Pickling Spice
Making your own pickling spice at home is really pretty easy. The biggest issue is honing in on your flavor profile since the spices to choose from are abundant. The Pickling Spice that we sell in our shops is more of an all-purpose pickling spice because it contains a balance of both sweet and savory spices. But you can take your homemade versions in very specific flavor directions. This will require some experimentation because you’ll be using whole or cracked spices (ground spices will leave a powdery residue and cloud the liquid which isn’t appealing), which aren’t all that palatable. So you likely won’t know what your blend will taste like until you’ve used it. I recommend starting small and testing a little to make sure you are happy with the results before pickling a big batch of something. You can get a better sense of what your pickling spice will taste like by grinding a bit of it down in a coffee or spice grinder or coarsely cracking it in a sealed zip top storage bag. This is particularly a good idea if you are adding any overpowering flavors like cloves, cumin, or juniper.

Make Your Own Memories
I hope this will inspire you to do like my grandparents did and get even more creative in your kitchen. You might even do what Grandma Johnston did and get the kids involved so they too might have some great food memories to share down the road.