Behind the Seasoning: Georgia Peach Spice

Unlike the ubiquitous fall favorite, pumpkin (where the spices contribute much of the flavor to the finished product), the appeal of a perfect peach pie is the distinctive flavor of the peaches themselves.

We're often inspired to create spice blends reflecting the regional cuisine, key ingredients, or culinary influence of different parts of the U.S. One Southern state's cuisine we hadn't yet explored was Georgia. We quickly decided that meant diving into peaches and BBQ.

Unlike the ubiquitous fall favorite, pumpkin (where the spices contribute much of the flavor to the finished product), the appeal of a perfect peach pie is the distinctive flavor of the peaches themselves. Peruse recipes and you’re likely to find a simple list of ingredients, each of which enhances a flavor note of the peaches. Sugar boosts the sweetness, vanilla adds an aromatic and slightly floral quality, lemon brings a tangy note, and a dash of clove and cinnamon add a kiss of spice. With this in mind, we set out to create a Georgia Peach Spice.

“The idea for Georgia Peach Spice,” Savory Spice founder Mike Johnston explains, “was to take the spices traditionally used to make spiced peaches (cloves, cinnamon, hints of lemon) and convert that flavor profile into a new type of seasoning.”

To start, we mixed Saigon cinnamon, citric acid, cloves, and allspice with sugar. We concocted three variations for taste testing: the first featured plain white sugar, the second used our signature Vanilla Bean Sugar, and the third was made with brown sugar. The white and brown sugars were good but the Vanilla Bean Sugar, not surprisingly, had that extra something that just made the flavors pop.

We also had to play around a bit with the various spices to find just the right balance. Initially, the clove was surprisingly strong and even overpowered the cinnamon flavor. It was getting closer but there was still something missing. After a bit of recipe research, we found that lemon zest is added to some versions of spiced peaches. A dash of lemon peel added a tangy burst to the final version of the seasoning. 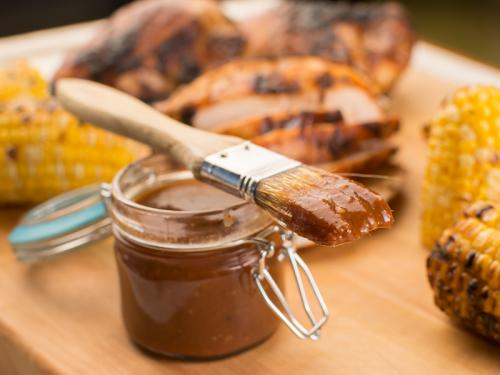 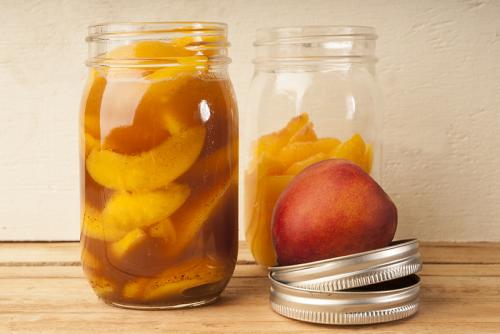 Then came the fun part—recipe development! Our warehouse manager, Matt Shealy, created both a peach pie and a peach cobbler, which the test kitchen morphed into a delicious Peach Crumble Pie. Our resident cocktail expert and Platte St/Denver, CO store manager, Shantelle Stephens, crafted an impressive cocktail, which she dubbed the Georgia Peach Blossom. The secret ingredient that makes the flavors sparkle is the spirit she uses—gin. The spices in the gin accent the Georgia Peach Spice. Featuring seasonal peaches and fresh, garden mint, it’s the perfect summer cocktail.

As I mentioned, our Georgia inspirations were both peaches and BBQ. Mike enthusiastically married these two flavors in a recipe for a sweet and tangy peach BBQ sauce. This family recipe comes from Mike’s father-in-law, Woody Chambers. The secret ingredient for Woody’s Peach BBQ Sauce might surprise you. While you certainly can use fresh Georgia peaches (for a subtle smokiness, try grilling them first!), Woody’s original version relies on peach baby food for the fruity flavor. Our test kitchen whipped up a batch on the sly. It wasn’t until the tasting was complete and the responses were enthusiastic that they revealed this secret ingredient! 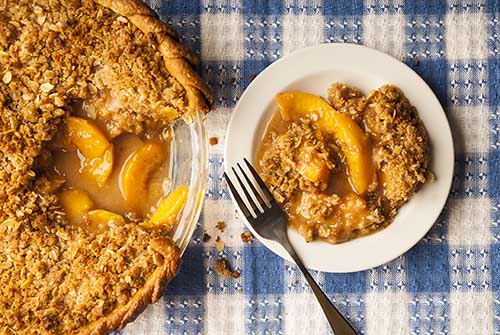 In the midst of peach season, we look forward to hear about any delicious recipes you create with our new Georgia Peach Spice.
Submit your Savory recipes here.

No comments on this article. Be the first!